Dear Valued Customer
This is a friendly reminder that we will are operating from our new premises in Milnerton.Please feel free to visit us and view our streamlined workshop operation and the single largest sales showroom in the Western Cape! 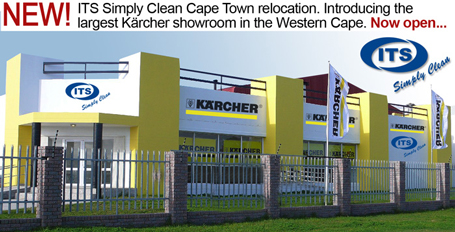 ITS wins yet another coveted award at the Karcher Annual dealer meeting held on the 09 February 2011 in Johannesburg.

ITS was awarded the dealer of the year award for 2010/11. The ceremony was attended by all Southern African distributors and senior management from the Karcher Subsidiary.

Blaine Carstens, the MD of Karcher on handing over of the trophy stated that ITS was without a doubt the bench mark to follow in the cleaning industry, he further stated that it was thanks to phenomenal growth backed by the most extensive and professional technical department available nationally that he and Karcher SA was very proud to make this ward to ITS. On receipt of  the award, Wayne Mulder, co owner of ITS thanked his committed and passionate staff for making yet another prestigious award like this possible.

Says, Co owners Wayne  and Gary Mulder, we are very humbled by the recognition received by the main players in the cleaning industry in SA and want to thank all our loyal customers without whom we could never have achieved these highs during  very trying financial times, it just shows if you are passionate and committed anything is achievable.